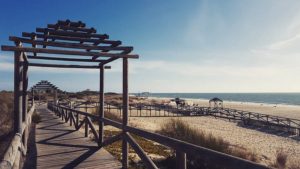 Sitting on the coast in the far west of the province of Cádiz, the pretty town of Chipiona lies at the mouth of the Guadalquivir river, only 52km from the city of Cádiz itself, Chipiona dates back to Roman times and currently has around 17,000 inhabitants.

In the 19th century, the town was a remote seafaring spa and today it has become a popular resort for Spanish tourists.

There are numerous hotels with their own particular styles. Chipiona has long been a popular tourist destination so there are many outstanding places in which to stay. Click HERE to see available places to stay in Chipiona.

The name of the town is derived from the old “Chipiona” Lighthouse, which is the oldest and most notable monument in Chipiona. The lighthouse is situated at Punta del Perro at the mouth of the river Gadalquivir. It was built to warn ships away from the large rock, Piedra de Salmedina. Despite the lighthouse´s presence, this rock has been responsible for many wrecks over the years. Visitors can tour the 69 metre high lighthouse and climb the 344 steps leading to the very top of the lighthouse. It is the tallest in Spain and remarkably, the third tallest in the world. On a clear day, you can enjoy views of up to 25 miles of the entire area, which are truly magnificent. They include sea views and other sights such as the cloister of the Sanctuary, the Cuzmán el Bueno Castle and the parish church, as well as the typical fish traps, for which the area is so famous. 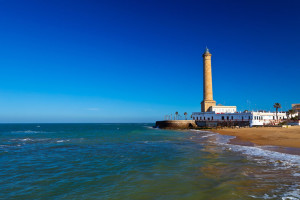 Chipiona boasts some beautiful beaches, frequented by many people living in and around Seville. However, the area is gradually opening up to international tourism.

The most famous beaches are Playa de la Regla and Playa del Camarón to the east of Chipiona. The coast stretches over some seven miles and has many other superb beaches of fine white sand and some are awarded blue flags by the European Union for their high standards of facilities and cleanliness. Consult is our Chipiona beach guide

The port at Chipiona is located in the west of the town and has moorings for hire as well as a sailing school.

Being a seafaring town, the monuments are mostly found close to the beaches. In addition to the lighthouse, already mentioned above, they include:

Once a fortress belonging to the Ponce de León family and over the centuries, it was turned into a monastery for different orders over the years. In 1251 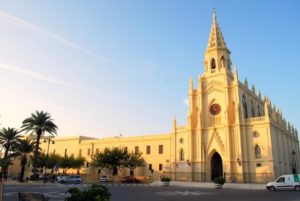 Chipiona was re-conquested by King Fernando III who built the castle in 1295. Today the castle is a monastery which is open to visitors.

A 16th century building but rebuilt in the 18th century. It is mainly Renaissance with Gothic sculptures and inside are many important pieces of art. Older locals come here to for the spa waters in the church fountain

This is an iron sculpture of a cross on a stone base, located on the sea promenade at the end of Calle Isaac Peral. It commemorates a terrifying earthquake that centred on Portugal in 1755, and touched Chipiona by sea, however it caused little damage. The monument was rebuilt in 1878 and renovated in 1910.

Formed by the action of the two rivers, Gaudalquivir and Gaudalete, the countryside around Chipiona consists of a very fertile plain covered with greenhouses used for the production of cut-flowers and other market garden produce. Along the coast the sand dunes and marshes that are ideal for many varieties of wildlife.

Chipiona produces a wide variety of products, from fish and crustaceans to fruit and vegetables. Shrimps are farmed in the rivers and the area yields huge white claw crabs. Chipiona is famous for its lobsters and nowhere in Spain will you find lobsters quite like here. There is plenty of activity down at the seafront, particularly during the summer months with bars, Mediterranean seafood restaurants, ice cream parlours and fun-filled entertainment for the whole family.

Main agricultural products include: wine growing and tomatoes. The area produces sweet Moscatel wine, sherry and wine vinegar. Visitors can visit and taste at the local wine producers as well as taste at the Bodega Cesar Florido and the Bedeguita de Castillito (Calle Castillo, 1). The tradition of winemaking dates back some five centuries where muscatel grapes have continued to grow in a mixture of clay and sand, producing a much sought after quality and flavour.

Chipiona is also Spain’s principal producer of carnations and these flowers are exported all over the world.

Fishing is the oldest trade in Chipiona from which the population has been making a living over the centuries. Fishing in Chipiona is famous for its high quality and its traditional techniques, as is that of neighbouring town, Sanlúcar de Barrameda .

Chipiona is characterized by the Chipiona fish traps, near Playa Las Canteras expertly built stone walls that begin at the coast and become higher as they stretch out to sea. The fish are trapped here by the tide. Locals use this traditional fishing technique, making use of low these low lying stretches of irregular red sandstone.

One of the most popular pass times today in the Costa de la Luz is golf and the 18 hole, par 72, course at the Costa Ballena Club, designed by Maria Olazabel, attracts many enthusiasts.

Such as surfing, sailing, kite surfing and windsurfing are also popular activities in the area and the waves and large stretches of beach are ideal.

Chipiona Carnival plays a large part of Chipiona life and dates back to the 1930s. Festivals are always exciting, colourful events where people celebrate night and day. The main carnival takes place mainly during January and February and particularly in the last week of February. Chipiona fills with locals and people from the neighbouring towns of Cádiz and Seville. The carnival is considered to be the best in the area and boasts a magnificent cavalcade with colourful costumes that takes place in the old town. It is a traditional affair taking place in late February, with many gastonomic attractions, which in themselves are a good reason to attend the carnival.

Chipiona was hardly touched by the famous Lisbon earthquake of 1755 and the town celebrated this fact with parades through the town. This tradition is continued to this day on the 1st November, every year.

On the first Sunday of June, the Romería del Pinar is celebrated in the Pinar de la Villa.

16th July the procession of the Virgen del Carmen is a majestic marine procession through town.

In August the town´s fiesta announces the grape harvest and in September the Vigil of Nuestra Señora de Regla takes place on the beach where music and local wine are the main attractions.